BEGIN TYPING YOUR SEARCH ABOVE AND PRESS RETURN TO SEARCH. PRESS ESC TO CANCEL
Skip to content

Epics are usually about heroes. But despite the usual ensemble cast, it is a heroine who dominates this story.

From the prolific pen of bestselling mythological fiction author, Anand Neelakantan, comes Queen of Mahishmathi, a 550-odd-page blockbuster, with 84 chapters and a cast of 47 characters: kings, queens, princes, rebels, slaves, a dwarf here, a eunuch there, a spiritual guru, a devadasi, a madman, a pirate, villains galore and a particularly terrifying species of predatory bird known as ‘Garuda pakshi’.

What makes this work even more awesome is that it is the concluding book of a trilogy (The Rise of Sivagami and Chaturanga were the first two titles) that was a by-product generated by the epic action films, Baahubali: 1 and 2.

The books thus expand the universe of the films by creating backstories for some important characters. There are no impediments in this marriage of true minds as SS Rajamouli, the director, clearly saw in Neelakantan the ideal candidate for a fruitful relationship.

Think about it: How often does a film director’s magnum opus procreate triplets in a novelist’s imagination? 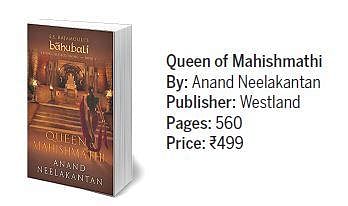 So, a prequel is what this trilogy must be called. Though the term is 20th century, the concept is as old as the Ramayana and the Mahabharata. Both epics have a galaxy of strong, popular characters whose individual story arcs, interpolated and interconnected, have seeded forests of local versions. Neelakantan, known for his ingenuity and atypical storytelling, has centred his earlier books (Asura: Tale of the Vanquished, the Ajaya series, Vanara: The Legend of Vali, Sugreeva and Tara) around some of these characters—with consummate success. This prequel trilogy draws its strength from the epic narrative structure, pooled with the author’s experience in screenplay writing for TV serials. Indeed, in true episodic style, it reads more like an assembly of well-written dramatic scenes from future screen versions.

Mahishmathi could be Hastinapur, but it isn’t. Instead, it is the appropriation of a name—from an ancient kingdom believed to have been on the banks of the Narmada. It is undefined, almost fantastical, sitting somewhere in the southern part of the subcontinent, replete with forests, waterfalls, secret caves, heavily guarded mines packed with rare gems, a dress code that vaguely belongs to 8th-9th century, as well as story tropes that are eternal and totally familiar, such as a powerful king with two sons who are rivals for a girl.

In time, the underlying rivalry between princes Bijjaladeva and Mahadeva will pass on to their sons who will fight an epic war for the throne and display the derring-do of epic heroes. Times change, but the stories that enthral us don’t. As befitting epic characters, the people in these pages are larger than life, neither good nor evil, but having shades of both. Jealousy, lust, revenge, greed, a hunger for power, drive them through a labyrinthine plot that seems to grow organically.

However, there are differences.Epics are usually about heroes. But despite the usual ensemble cast, it is a heroine who dominates this story. Sivagami, who, as we saw in the movies, is a powerful character, married to the disabled, side-lined older prince, Bijjaladeva.

Though he could pass for Dhritarashtra, she is no dutiful Gandhari. In this book, that goes into Sivagami’s  origins, we learn more about the experiences that have shaped her into a strong, respected regent who can also be a vengeful mother-in-law. A second character with a compelling on-screen presence, whose story is elucidated here, is Katappa, the Bhishma-like loyal protector of the Mahishmathi throne.

Indeed, Neelakantan’s writing has added interesting, contemporary layers to the portrayals of all characters. Sample these words from a spiritual guru.

February 11, 2021 in Blog
Protected: The sisterhood of royal intrigue

February 11, 2021 in Blog
Protected: Review of The Kaunteyas from ‘The Hindu’